Today I went with a close friend to see a movie. We saw paper towns and it was pretty good! We got to sit in a movie theater with big leather chairs that lean back and have foot rests. Being in these chairs actually helped me tic a lot less than I regularly would in a movie theater. Sitting in an audience/lecture/or just sitting and watching a movie is a MAJOR trigger for my tics for some reason, but being able to move around and shift to multiple comfy positions in these amazing chairs really seemed to help! I was doing both motor tics and vocal tics in the theater, but it was really one of the first times i've ever felt comfortable in that situation.

Most of the time I feel so on edge in a theater, but tonight I felt at ease even though I was ticcing a fair amount. I'm not sure why I felt so at ease, but i'm pretty sure it had to do with my amazing college friend who recently told me she doesn't want me to hide anything about my Tourette's from her. She wants me to be open and able to talk about it with her and she certainly doesn't want me to hide my tics from her. She told me I am not only one of her closest friends in college, but one of the closest friends she has ever had. She loves that I have a goal of being more open about my TS and was really encouraging me to be more open with her and with others.

Tonight i'm thankful for my amazing friends who I can spend Friday nights with and who accept me for who I am. I'm grateful they don't treat me any differently because of my TS and don't think of me differently when they see me ticcing. I'm grateful for my closest friends who don't even blink when I double over to punch myself in the stomach. I don't mind if people ask if i'm okay when i'm ticcing like this and I actually appreciate their concern because I know they care,  but I also love it when my friends can just completely ignore it and not even give it a second glance.
Posted by Ruthie at 10:14 PM No comments:

I'm starting to feel more comfortable ticcing around him because I know he doesn't even think twice. He accepts that Tourette's is real and tics aren't something the person can control. When I tell him about camp, he says things that are really compassionate and real. I really appreciate that and am grateful that he is that way. I feel like if he ever has a child with tics (which there's a real possibility of) or if he is the uncle to my kids with tics/ TS, he will be great with them and will accept them for who they are.

I used to worry that he would be that kid who in school who would laugh at kids who are different (aka me because of my tics) or think they are "weird" , but I know he doesn't think tourette's is "weird". He thinks of Tourette's as a medical condition, not something that's the person's fault or that makes them weird. I am grateful he is so well educated about Tourette's and doesn't have the perspective my grandparents or even my mom sometimes has.
Posted by Ruthie at 9:06 PM No comments: 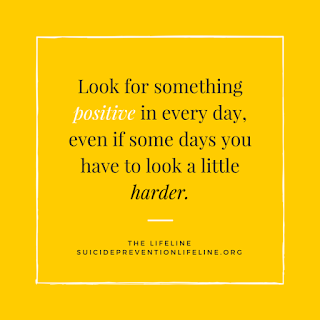 I've decided I'm going to start a positivity challenge! I will look for one positive thing in every day and write it down/ blog about it! I will also try to write something I am grateful for each day.  I'm going to try to do this for as many days as I can! I may skip some days, but i'm going to try my best!

If you train your brain to look for the positives, your brain will automatically start doing this and you will be a happier and more positive person overall. For anyone who wants to take the positivity challenge along with me, please send me your positive moments and I will post them on the blog!

Today I reconnected with an childhood friend. I'm  excited because she moved in a few houses down from me coincidentally. I'm hoping this is the start of a beautiful rekindled friendship. We both have differences we've had to deal with in our life and today we went to the baseball game together and  talked through all 9 innings. We both opened up to each other about what it's like to grow up being different and it felt really great to be open with her. It was so nice to feel safe and comfortable opening up to her. I hope she felt the same way when she opened up to me. It was nice to share such similar experiences with each other. We have a lot in common and i'm really looking forward to spending more time with her over the next month or so before school starts.

Today I am grateful for the fact that she moved in so close to me and we get this chance to reconnect and share our experiences. I'm also grateful that camp gives me an easy opportunity to open up to others about my tics. When my friend asked me how I got involved with the camp I was able to easily open up to her and tell her that I got involved because tics run in my family and that I have tics too. I'm also grateful that i'm not the only one in my family who has TS. The fact that my cousin has been diagnosed with TS too and that there is so much OCD in my family helps me to feel so much less alone and less singled out. I'm not the only one in my family who deals with this and that simple statement helps more than I can express. And of course like every day i'm grateful for my camp family who remind me on a regular basis I am never alone. They are always there for me and have my back. I am VERY VERY far from being along. I am surrounded with love, support, friendship, family, and acceptance.
Posted by Ruthie at 10:04 PM No comments:

Email ThisBlogThis!Share to TwitterShare to FacebookShare to Pinterest
Labels: Positivity, Telling Others, Tics

There's puppy on the plane!

I haven't been able to write for the past week or so because things have been pretty crazy since i've been back from camp. My mental obsessions and compulsions have really been acting up and i've had to implement a lot of strategies to help them calm down. I've also been very busy with work, extracurriculars, and studying for the GRE/ preparing to apply to graduate school. This is the first time i've been feeling ready to write and it's 12:40pm.
I didn't want to write about too much tonight, but since i'm in the mood I wanted to tell a light hearted story. After camp I hung out with my camp family in Atlanta. We all stayed together in a suite and had the absolute best time. Even though my tics were pretty bad (worse than they have been in a while) and even though my anxiety and OCD were pretty bad as well, I felt so supported and loved. I will definitely write more about the weekend later! There are SO many fun stories, but for tonight I wanted to tell the story of the plane ride back home because its cute and quick.
My vocal tics had been acting up A LOT during the week of camp and even though they had started to calm down near the end of my time in Atlanta, they were still kind of bad. So on the plane I knew I was going to educate the person sitting next to me about Tourette's even though I was going to try to sleep most of the way. The man who sat down next to me on the plane was speaking in spanish on his phone, so I pulled up the spanish version of "What is Tourette Syndrome" from the TSA website on my phone in case he didn't speak english (http://www.tsa-usa.org/imaganw/What_is_TS_English.pdf). They also have this brochure in Chinese, Vietname, Korean, and Japanese in case you need it which i've found comforting, particularly on planes, even though I've never needed to use it.
When he got off the phone I introduced myself and asked him if he spoke english. He said he did, so I didn't need to use the brochure. I then told him I just wanted to let him know that I have a condition which make me twitch and make noises that I can't control. I had been ticcing while he was on the phone, and his immediate reaction was to smile and told me he understood and that it was no problem. He then, however proceeded to ask me if I had smuggled a puppy on the airplane in my backpack!! Hahahaha. I laughed and told him no, that was was just me, and that that's a noise I make because of my tics. I'm not sure if he understood what I was saying because he kind of still looked confused! I think it was either the language barrier or that he didn't believe me and actually thought I was trying to make up an excuse to hide the fact that I hiding a puppy in my backpack!
I had a good laugh and texted my camp friends after the flight telling them the story. They said they were proud of me for telling the person on the plane about my TS (although for me that's really no big deal! I do it all the time, even if sometimes I am nervous initially). I also think they got a good kick out of the whole puppy confusion!
Posted by Ruthie at 11:04 PM 1 comment:

Email ThisBlogThis!Share to TwitterShare to FacebookShare to Pinterest
Labels: Camp Twitch and Shout, Made me smile, OCD, Telling Others, Tics

Dad is home! Camp is one week away!

My dad is officially home from the hospital! I'm his "babysitter" tonight lol! Camp Twitch and Shout is just one week away!!!! I'm beyond excited to be at my favorite place on earth with the best kids ever in just one week!!
Posted by Ruthie at 7:05 PM No comments: