Today I went with my grandma to have brunch. She has been wanting to tell me the story of her relationship with her friend who recently passed away from cancer. She wants me to write out the story since I am minoring in creative writing in college and I am honored. After she told me the story, we visited the cemetery where she is buried. In the cemetery I saw this poem on the back of a women's grave. The woman passed away when she was only 32, and was both a mother and a wife. Her name is Stephanie. I say "is" instead of was because I know that is what she would want me to say.

I wanted to share the poem here to honor the memory of Stephanie, a women who I have never met but know I would have had a lot in common with just based on her poem that was written on the back of her grave stone. I believe she may have written the poem herself, but I'm not 100% sure. All I know is that I can't find the poem anywhere else but on this Stephanie's grave which makes it all the more special.

It is a simple poem, but sometimes the simple things can really be the most complex. It's a hidden treasure that I am honored to have stumbled upon and am honored to share. Maybe someday I can do something with it, such as have it published under her name so that all the world would have an opportunity to read it. Poems hold hold so much power and beauty within them. I feel like I know Stephanie in my heart.

Here is the picture I took of the back of her grave and also below is the poem typed out in case anyone has trouble reading the text in the picture. 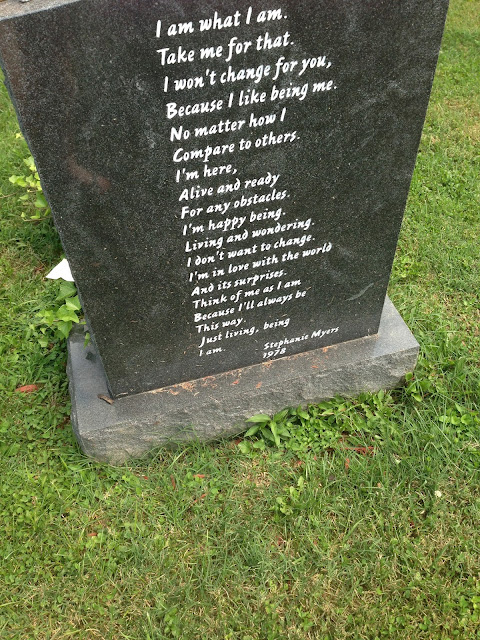 "I am who I am.
Take me for that.
I won't change for you,
Because I like being me.
No matter how I compare to others.
I'm here,
Alive and ready
for any obstacles.
I'm happy being.
Living and wondering.
I don't want to change.
I'm in love with the world
And its surprises.
Think of me as I am
Because I'll always be this way.
Just living, being
I am."
-Stephanie Myers 1978
Posted by Ruthie at 12:16 PM

Email ThisBlogThis!Share to TwitterShare to FacebookShare to Pinterest
Labels: Friends and Family, Made me smile