A Positive Response From My Poetry Professor

Hey everyone! In my last post I talked about how I was having trouble recently participating in my poetry class due to my tics. So, I sent my professor this email to explain:

""I wanted to let you know that i've been having trouble participating in class lately due to my tics. I've had this problem in the past, but it seems to be becoming more frequent again. More often than not, when I want to say something in class my tics interfere and I'm not able to open my mouth and say what I want to say. Hopefully this problem will pass soon, but i'm really not sure.
I wanted to let you know about this in hopes that it will not affect my participation grade.
Thank you in advance for your understanding"


She responded to my e-mail yesterday and this was her response:

"Thanks for letting me know, I had noticed your participation has been a little less than usual, but I understand."

Short, sweet, and to the point! I was really glad to get this e-mail from her because I had been worrying that she would doc my participation grade. But, nope! She understands and once again with a little education and explanation TS is not going to hold me back even when the tics do get rough.

Posted by Ruthie at 8:38 AM No comments:

Having Trouble Participating In Class Due to Tics

Lately I seem to have been having more trouble than usual talking in class because of my tics. When I have something I want to say in class, more often than not, my body locks up, I start ticcing a lot, and when my body has finally calmed down the conversation has moved on and what I had to say is no loner relevant or i've completely forgotten whatever it was I was going to say. I have a tic where my eyes go out of focus, my whole body locks up and freezes, and I can't say a word. That seems to be the #1 tic that's interfering with my talking in class. The only class this really interferes with is my poetry writing 2 class. The rest of my classes don't really give a class participation grade, but my poetry class does. So, I decided to e-mail my poetry teacher today and this is the e-mail I sent her:

"I wanted to let you know that i've been having trouble participating in class lately due to my tics. I've had this problem in the past, but it seems to be becoming more frequent again. More often than not, when I want to say something in class my tics interfere and I'm not able to open my mouth and say what I want to say. Hopefully this problem will pass soon, but i'm really not sure.

I wanted to let you know about this in hopes that it will not affect my participation grade.

Thank you in advance for your understanding"

Hopefully she will understand. And hopefully my participation grade won't be affected by this. I'll keep you guys updated and let you know what she says in response to this e-mail. So far, my college has been incredibly understanding of my TS and I have come accross very few problems, if any at all. So I expect that she will be understanding and that her response will be positive!
Posted by Ruthie at 1:36 PM 3 comments:

I Have Tourette's, but Tourette's Doesn't Have Me: 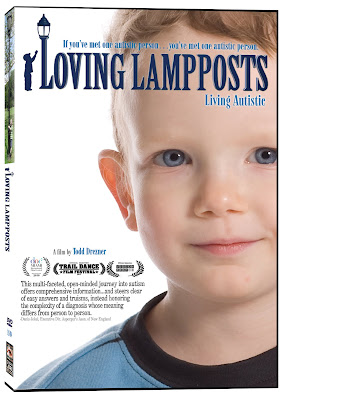 Recommended Age: Any age!
Topic: Autism
My Rating: 9
Link to the Website: http://lovinglamppostsmovie.com/index.html
Summary: After his son's diagnosis, filmmaker Todd Drezner visits the front lines of the autism wars. We meet the "recovery movement," which views autism as a tragic epidemic brought on by environmental toxins. Operating outside the boundaries of mainstream medicine, these parents, doctors, and therapists search for unconventional treatments that can "reverse" autism and restore their children to normal lives.

We meet the 'neurodiversity' movement, which argues that autism should be accepted and autistic
people supported. This group argues that the focus on treatments and cures causes the wider society to
view autistic people as damaged and sick. Acceptance is the better way, but how do you practice
acceptanceof autism in a world where the very word can terrify parents?And we meet a too often
ignored group: autistic adults. It's these adults who show just how tricky it is to judge an autistic
person's life. Is an autistic woman who directs academic research about autism recovered?
What if the same woman has trouble speaking and uses text-to-speech software to communicate?
Is an autistic man who lives in his own apartment recovered? What if his mother must hire people to
do his laundry and take him out in the evenings?

This wide angle view of autism makes clear what's at stake in the autism wars. Will we live in a world
dominated by autism conferences where vendors hawk vitamins and hyperbaric chambers to parents
desperate for a cure? Or will we provide the support that autistic adults need to lead the best lives they
can? And can these two worlds possibly co-exist? 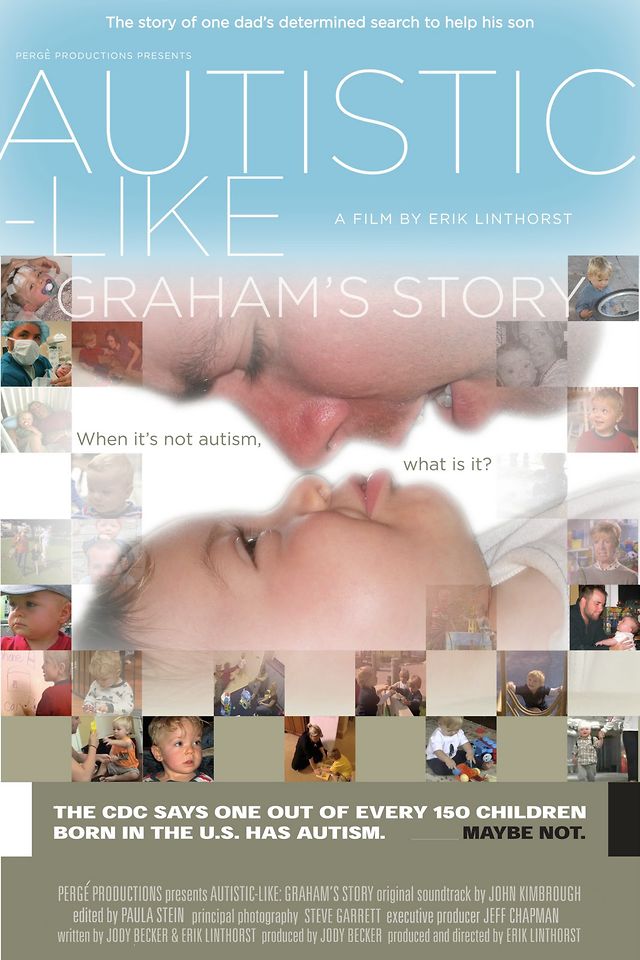 Recommended Age: Any Age!
Topic: Autism, Sensory Processing Disorder
My Rating: 9
Link to website: http://www.autisticlike.com/
Summary: an intimate family portrait showing one dad's determined quest to find the right therapies,
the right doctors, and even the right words to describe his son. This short subject documentary is a
startling report from the edge of the autism epidemic, and illuminates the medical, social and public
health issues faced by families whose autistic-like children have no clear diagnosis, and are offered
no specific treatment.

A Mother's Courage: Talking Back to Autism:

Recommended Age: Any Age!
Topic: Autism
My Rating: 7
Link to Website: http://www.amotherscourage.org/
Summary: A Mother’s Courage: Talking Back to Autism (a.k.a The Sunshine Boy), a documentary by
Fridrik Thor Fridriksson, tells the story of Margret, a mother who has done everything in her power to
help her son. Keli is eleven years old and is severely autistic - his mother doesn‘t even know if he
understands Icelandic, let alone other languages. Even if Margret holds no unrealistic expectations on
behalf of Keli, she has the quenchless thirst for knowledge about the mysterious and complex condition
that autism undeniably is. Along they way, Margret meets other families and hears their unique stories
about how they too have been touched by autism.

Recommended Age: 18 +
Topic: Bipolar Disorder and Suicide
My Rating: 8
Link to website: http://www.hbo.com/documentaries/boy-interrupted#/
Summary: HBO Documentary, Boy Interrupted looks at the life of Evan Perry a 15-year-old boy from New York who committed suicide in 2005. The film made by his parents Dana and Hart examines how Evan's bipolar disorder and depression affected his life and the life of his family. Evan Perry came from a family with a history of mental illness; his uncle had committed suicide age 21. Evan had been diagnosed with depression and prescribed Prozac, then rediagnosed with bipolar depression and prescribed mood stabilizers, and later received milieu therapy, which brought relief for a time.However, aged 15, he jumped to his death from his family's apartment window.

Recommended Age: Any age
Topic: Medication, Bipolar Disorder
My Rating: 7
Website: http://www.pbs.org/wgbh/pages/frontline/medicatedchild/
Summary: This fascinating program from PBS's "Frontline" series explores the realities and controversies surrounding the increasingly frequent prescription of behavior-modifying medication for children as young as 2 years old. Numerous experts, including psychiatrists, government regulators and scientific researchers, discuss both the dangers and the benefits of the various drugs being used to treat children with behavioral problems and mental illnesses.

Email ThisBlogThis!Share to TwitterShare to FacebookShare to Pinterest
Labels: Video

Your Words are Powerful!

A little more than a week ago, I participated in a TSA event called the teen panel. Basically, it was an event where we had 4 people (including me) who were teens and college students and we talked to the group of younger kids, parents, and other teens about our lives with TS, our stories, and what has helped and hasn't helped along the way. I was nervous because I hadn't really done anything like this before, but the chair of the TSA really wanted me to do it since i'm a sophomore in college living life successfully and to it's fullest with TS along for the ride.

I was extra nervous when I saw that the neurologist and post doctoral fellow who I work with in the Tourette Syndrome lab at the medical school showed up to talk about a study. They are people who I really care about how they think of me and I was so nervous to talk about my TS and associated conditions openly with them in the audience. They of course already knew about my TS, but I had never talked about it this openly with them around. I thought maybe it would effect how they think about me in the professional setting, but I went on with the panel of course and talked as openly as I could about my life with TS, OCD, Anxiety, Disgraphia, and Discalculia. Both the neurologist and the post doctoral fellow have Tourette themselves so I really don't know what I was worrying so much about! They know what it's like, they study TS, and they have pretty much dedicated heir lives studying TS and treating patients with TS, so really by worrying so much I was being silly.

After the panel was over and we were done speaking, it was proved to me that truly I was worrying for no reason at all! The neurologist who I work with came up to me with the post doc and gave me a thumbs up. He told me I did a great job and then he said to me "If there was one person I would bet on to graduate from college and do something with their life, it would be you." This made my night beyond belief! To have someone who I look up to and admire so much say this to me was incredible. He is someone who is so successful, he has an MD and and PHD and he told me that he believes ME, even after I spoke openly about my TS and the struggles I have gone though with it. And on top of all that, I was ticcing A LOT when I was speaking on the panel because I was so nervous. I was even doing my vocal tics and of course my motor tics. I think this was the most i've ticced around either of them, and regardless they still said I did a great job and still believe I can do great things.

That one comment has made a difference for me. It has given me more confidence recently and I feel like I'm important. Never underestimate the power of your own words! They have power beyond what you think, so choose your words carefully and don't hesitate to tell people the things you appreciate about them :)
Posted by Ruthie at 10:29 AM 1 comment: