I love my friends and how they support me! :)


So I know it's been a little while since I posted directly on the blog, but I promise I am still here and blogging! I wanted to write about a little TS experience that made me feel super supported!!!

So the other day, I posted one of my Tourette's awareness pictures on my main facebook page that I use for school and communicating with my high school/college friends! I wanted to share the picture with my friends because I was proud of the picture I made and I wanted to spread more TS awareness among people who are friends with me but might not be my closest friends (who already know loads about TS because of being one of my close friends). Anyway this was the picture I posted on my wall: 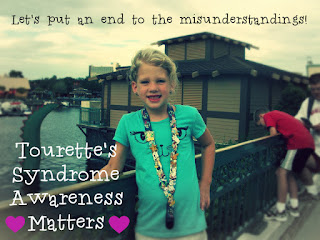 The first thing that happened was a lot of people liked it!!! Among the people who liked the picture are best friends from high school, friends of mine who I have met through TSA functions, new friends in college from my dorm, new friends in college from my sorority, my roommate from a summer program who I was really close with, and a person from my summer job at Opera Theater. I was really glad that all of these people liked the photo, but that's certainly not all to this story.

After a lot of people liked it, my ex-boyfriend commented on the picture. Now for those of you who have been following my blog for a long time you may have seen posts that I posted on here about my ex while I was still dating him. He was always very curious and asked me questions about my TS which I liked at the time because I always prefer if people ask questions if they have them as opposed to wondering and making an incorrect assumption. My ex does however, have Aspergers syndrome and doesn't always know what questions are appropriate to ask or what comments are appropriate to say in social setting or online.

I ended up breaking up with him after about 6 months because of a totally different reason which has nothing to do with my Tourette's or his Aspergers. That reason isn't really pertinent to this story, so I'm not really going to talk about that on my blog.

Anyway, with only very good intentions my ex commented on the post and said, "I am really really really proud of you for trying to live life to the fullest despite this!" I initially looked at the comment thinking that it was kind of sweet of him to say but I also saw the errors in this kind of comment. The words "trying" and "despite this" began to nag at me because of course I am not just trying to live life, I am living life, and I am not living life "despite" having Tourette's but rather Tourette's is a part of my life that has given me some extra challenges but has also given me so many good things such as the opportunity to be an advocate for people who have different challenges in their life and the opportunity to see the world in a unique way. I don't see myself as someone who has succeeded in life in spite of my Tourette's, but rather because of it.

Even though I had these nagging thoughts and was slightly annoyed with the words he chose to use in his comment, I knew he meant well so I wasn't going to let it bother me. On the other hand though, one of my best friends from high school wasn't exactly feeling the same way when she saw this comment. Soon after she saw the comment she texted me and we had a conversation that went a little something like this:

Steam Punk: "OMG did you see your ex's comment on your newest pic?"
Me: Yeah
Steam Punk: If I were you I would say back tourette's is a condition, not a handicap douche.
Me: lol, I think that might come off a little harsh.
Steam Punk: That comment was so dumb though XD
Me: Maybe, but I think his intentions were good. He wasn't trying to be offensive.
Steam Punk: I guess your're right. I had a nice chuckle though. I say just ignore it.

Anyway that was basically the conversation we had over text. Although my friend may have been overreacting just a bit, I really appreciated her texts. Even though I already know this, it reminded me just how much she supports me and is ready to defend me if anyone were to insult me because of my Tourette's in any way. It reminded me just how awesome my friends are and how supportive they are of my Tourette's!

A little later I also told one of my new friends in college what my ex had put as a comment on the picture. My friend was also very supportive in spite of the fact that he hasn't even known about my TS for that long since he is one of my newer friends here at college. He told me that he can see my ex was trying to say something nice to me but it just came off the wrong way. He told me that he has an older sister who has an intellectual disability and he understands why the comment was a bit off because of the fact that having his sister in his life has brought many good things to his family as well as challenges. He said he felt like the comment was ignoring the good things challenges in life may bring.

And even a little later another one of my friends (who has known about my TS since the beginning of school) offered to post another comment on the picture under my ex's comment saying something to defend me. In the end, I decided it would be best to just ignore the comment because of my ex's Aspergers. I didn't want to make him feel bad for saying something he didn't know might have come off in a bit of a negative way.

The point of this all wasn't even really what he said in the first place in response to the picture. What was most important was the way all of my friends reacted and supported me! I have amazing friends who understand and support me, tics and all and I am so happy to be in a place with people who support me and send me so much love!
Posted by Ruthie at 12:40 PM

Email ThisBlogThis!Share to TwitterShare to FacebookShare to Pinterest
Labels: Awarness, College, Friends and Family, Made me smile, TS Story Of the Day