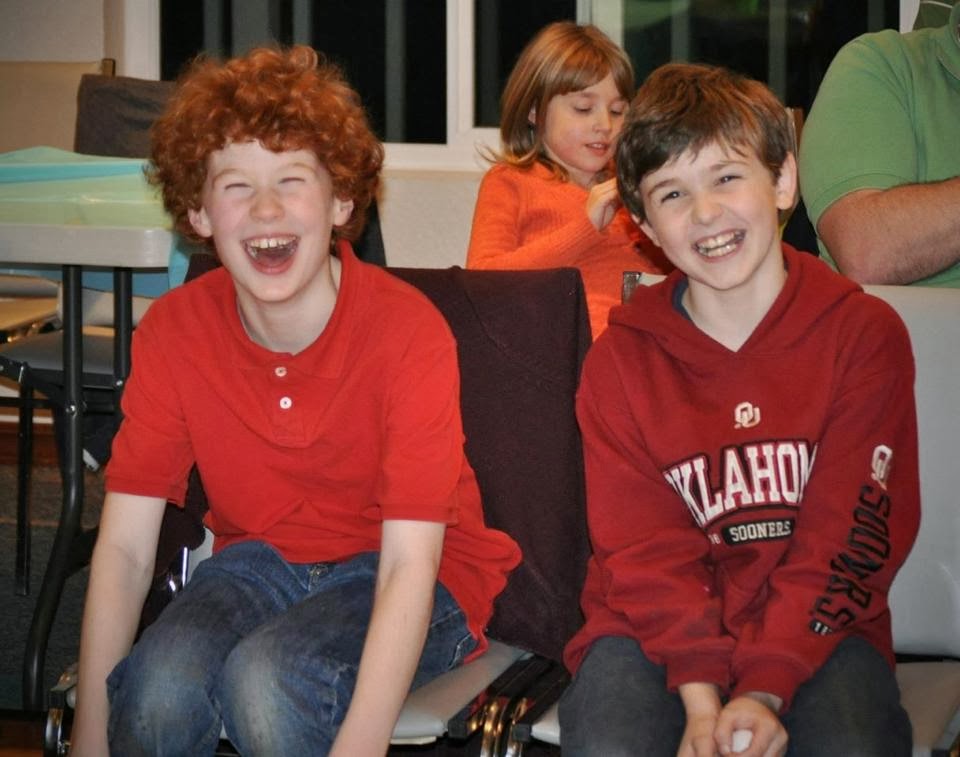 Christopher (the red head) was diagnosed with Tourette's (and ADHD and OCD tendencies) when he was 4 years old. Because he was so young, we didn't really tell him. We felt he was too young to properly process his diagnosis. Besides, as far as we were concerned the diagnosis was valuable only in the context of giving us more information to help him.
We are very active in our community. Because we home school, there aren't many situations where Christopher has met kids before I have met them and their parents. Also, being home schooled he never had to get an IEP. His diagnosis just never came up.
Before we knew it, he was in upper elementary school and had never been told he has Tourette's. We knew we needed to talk to him. We didn't know how to tell him he had this thing - this DISorder - and not make it a negative thing.
He got this tic where he was sticking out his tongue, especially when he had food in his mouth. I told his best friend's mom about it, who is also a close friend of mine. I wanted her to talk to her children about it so that if they saw it they knew he wasn't trying to be rude or gross; he could not help it.
A few days later during bedtime cuddles Christopher looked at me and said, "Mommy, did you know that the reason I stick my tongue out is because I have tics. Do you know what a tic is?" He proceeded to tell me all about tics and how he has them. I asked him where he learned about this and he said," Oh, Ian told me."
My eyes filled with tears of love and gratitude. I was so amazed that this 9-year-old boy was able to talk to Christopher about his tics and did it in a way that left Christopher feeling very positive about it. While I felt bad that he had beat me to it, I was amazed at how well this precious child was able to communicate normalcy to Christopher. It was then that I was sure how much Ian and his family would always mean to us!
Posted by Ruthie at 3:51 PM